Sophia Smith leads Portland to a trophy, shows there’s more to come for her and the NWSL

WASHINGTON D.C. –  You could feel the energy in the air of the nearly sold out Audi Field before the 2022 NWSL Championship kicked off on Saturday.

The Kansas City Current immediately lined up in their formation ahead of the opening whistle, but the Portland Thorns opted to huddle together in the middle of their half. Like they’ve done all season, the Thorns were tuning out the noise. Their ability to focus, both on each other and on the task at hand, helped them secure their league-leading third NWSL title in front of a crowd of 17,624 fans.

It only took the Thorns four minutes to break down Kansas City, thanks to NWSL MVP Sophia Smith. Smith made a run in behind the Kansas City backline before capitalizing on a defensive slip-up and beating Current goalkeeper AD Franch to put the Thorns up 1-0. She also had a hand in the play that led to the second goal of the match – a Kansas City own goal – that saw Yazmeen Ryan’s cross end up in the back of the net early in the second half.

A strong performance in the biggest game of the year was the cherry on top of a dominant season for Smith, who was crowned NWSL Championship MVP after the match. That’s her second MVP trophy this season, as she became the youngest player in league history to earn regular season or Championship MVP honors, and the first to achieve that feat in the same season.

Smith’s dominance has been a theme for the Thorns – and the entire league – all season. En route to lifting the NWSL Championship trophy, Smith broke the Thorns’ single-season scoring record with 14 regular season goals in 18 appearances, bagged four braces to tie the NWSL single-season record, and became the youngest player to score in an NWSL final.

In the post-Championship press conference, though, Smith gave much of the credit to her teammates.

Smith’s sentiments were unsurprising, partially because giving credit to their teammates is just what professional athletes do in post-game press conferences. But also because her teammates really did show up on Saturday.

Becky Sauerbrunn and Natalia Kuikka led a backline that allowed just nine shots and prevented the Kansas City attack from registering a single shot on goal. Sauerbrunn won possession on 13 different occasions – the most of any player – and only misplaced four passes all night. Kuikka led the game in tackles won (6) and had more touches than any other player on the field for either team (80).

The Portland midfield was organized, too, in-part thanks to an impressive showing by 2022 Rookie of the Year finalist Sam Coffey. Realistically, though, Coffey didn’t wait for the NWSL Championship to shine. She’s been lights-out all season, quarterbacking the Thorns’ attack from deep and controlling the tempo of every match on both sides of the ball. After the final, Portland head coach Rhian Wilkinson praised Coffey’s performances throughout 2022.

The Thorns’ attack was relentless, too. Portland registered twice as many shots (18) as the Current and their play in the attacking third forced the own-goal that iced their Championship victory. Portland’s performance didn’t seem to shock Kansas City head coach Matt Potter in the slightest, who told the media after the game that “Portland showed why they’re Portland tonight.”

Though they came up empty on Saturday, Kansas City deserve credit for their successful season. They were on a worst-to-first ride that saw them go from last place in 2021 to vying for an NWSL Championship trophy just one year later. Unbeaten in 13 matches through the regular season, Kansas City battled for the NWSL Shield until the very end. So despite the disappointing end to their season, the Current clearly have a lot to be proud of, and even more to build on, moving forward.

That’s true of the league at large, too.

Jessica Berman, the NWSL’s commissioner, highlighted how far the NWSL has come in 10 years of existence during a media day leading up to the Championship match. The league broke attendance records repeatedly this season and the NWSL’s one-millionth fan came through a turnstile for a match in 2022. The average attendance for the playoffs was the highest in league history, too, coming in at about 21,000 across the four playoff matches leading up to Saturday’s final.

Off the field, Paramount+ viewership and sponsorship was up 30% and 90% year-over-year, respectively. Much of that explains how the league – and one of their sponsors, Ally – pulled off moving the Championship match to the primetime slot on big CBS for the first time in history.

The most exciting part of all of this, though, is that the NWSL is just getting started. The records – both on and off the field – that were set in the last six months are almost certainly going to be broken in 2023. So, let’s buckle up for the NWSL offseason and all the chaos that comes with it. As the league enters their second decade, it’s bound to be a wild ride.

All data courtesy of StatsPerform. 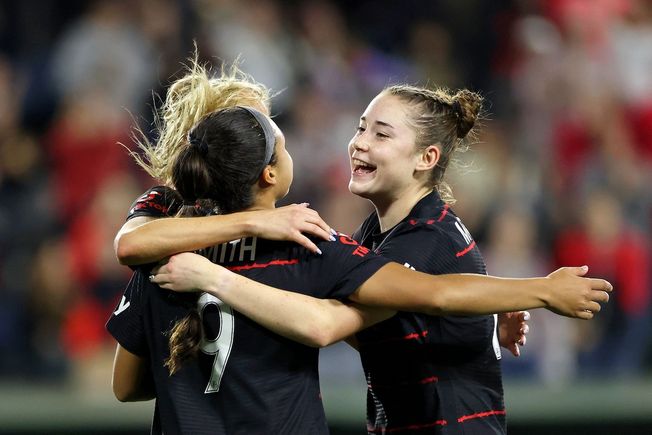 The key stats behind all four NWSL semifinalists